What Is De Quervain's Tenosynovitis & Can Chiropractic Help 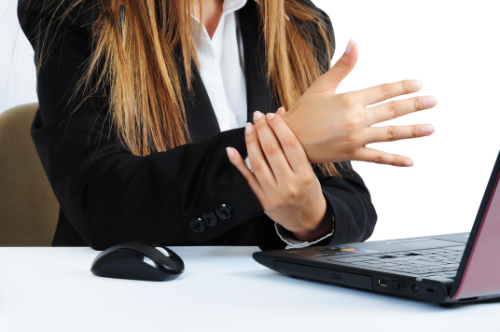 De Quervain's Tenosynovitis, also called “washerwoman sprain,” is a condition of the hand that typically affects people who do continuous, fast, repetitive movements. The patient can experience a sudden onset of the condition or it can be gradual, beginning with tenderness in the thumb area and slowly progressing. It can restrict activity, but it doesn’t have to be a long-term disability. Chiropractic care can help relieve the symptoms of De Quervain’s Tenosynovitis and the hand can return to normal function.

What Is De Quervain's Tenosynovitis?

De Quervain's Tenosynovitis is a condition affecting the thumb side of the wrist. It is a very painful condition that makes many everyday activities difficult or impossible. Many activities like playing golf, lifting a child, garden work, and racket sports can worsen the condition.

What are the Symptoms of De Quervain's Tenosynovitis?

There are several distinctive symptoms of De Quervain’s tenosynovitis which include:

If the condition is allowed to progress or goes untreated it can involve the forearm and entire thumb, causing pain and swelling in those areas. The pain and symptoms can be exacerbated by movements that involve the wrist and thumb. The symptoms can last for a long time, weeks or even months.

The exact cause of De Quervain’s Tenosynovitis is not known, but the condition is commonly associated with chronic overuse of the wrist. There are tendons that connect the wrist and lower thumb, enabling movement like grasping, gripping, pinching, and wringing. The tendons slide through a sheath as they facilitate the movement. Over time, the sheath can swell and thicken which inhibits the amount of the tendon’s movement. When the movements are repetitive, it can cause irritation of the sheath, resulting in inflammation.

Who is at Risk for De Quervain's Tenosynovitis?

Research has identified several groups that are at risk for developing De Quervain’s Tenosynovitis:

This condition has typically been considered to be one that affects people who are middle-aged. However, with the popularity of texting, many young people experience symptoms of De Quervain’s. In one study, more than half of students who texted extensively were labeled positive for De Quervain’s.

What are the Treatments for De Quervain's Tenosynovitis?

Treatment for De Quervain’s Tenosynovitis include:

If standard treatment is not effective it may be necessary to seek medical attention. If the condition is severe or chronic, the doctor may inject corticosteroid directly into the tendon sheath. Surgery for De Quervain’s is not common, but it may be deemed necessary in order to release the thumb. The speed of healing and degree of normal use of the thumb depends on the treatment chosen and if the activity that exacerbates the condition is stopped.

A chiropractor may recommend rest, ice, and bracing for a patient with De Quervain’s Tenosynovitis. Upon reviewing the patient’s lifestyle and habits, he or she may also advise ergonomic changes, modification of activity, and reduce exposure to positions that exacerbate the symptoms. Soft tissue therapies may be used to quickly bring relief to the soft tissue, minimizing the inflammation and pain. As the pain decreases, the chiropractor will recommend specific strengthening and stretching exercises that involve the wrist, thumb, and forearm.

With regular care and modification to activities, the condition can be healed and full mobility of the thumb and wrist can be restored.